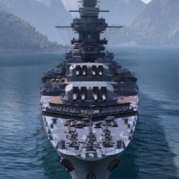 Is it just me or has the rework diminished Battleship impact?

By partridge_in_a_pear_tree, February 1, 2021 in Battleships