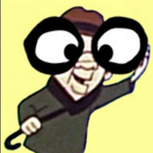 By Go4U, November 1, 2020 in Announcements and Discussion