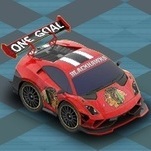 Kamikaze / Fujin - any way to get one?