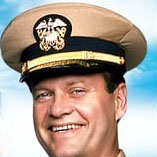 Just Getting Ready For Monday, That's All.