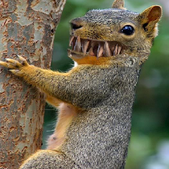 Does anyone else feel ripped off lately?

By SquirrelBytes, May 24, 2020 in General Game Discussion