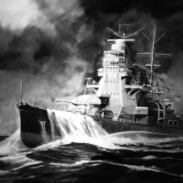 Death of the DD

By foehammer273, April 8, 2020 in Player Feature and Gameplay Suggestions