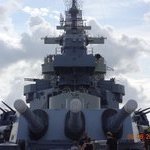 Naval Battle: Damage not counting towards next bar