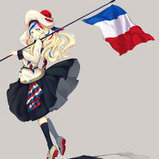 Help me interpret my DATA! :D

By Sarah_Lafayette, October 22, 2019 in Game Support and Bug Reporting