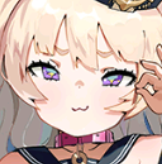 By Alisette, September 17, 2019 in Aircraft Carriers