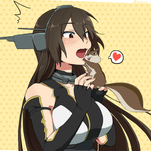 The armor of the Nagato class battleship

By NagatoKaiNi, August 26, 2019 in Japanese Battleships