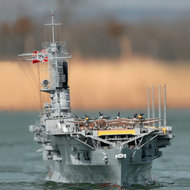 Simplified Balance: An AA/Flak and Carrier Aircraft Proposal for Tier 8-10