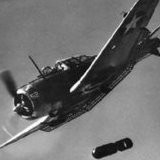 Is the in-game Supermarine Seafire too slow??

By WhiskeyTangoFoxtrot_42, March 14, 2019 in Aircraft Carriers