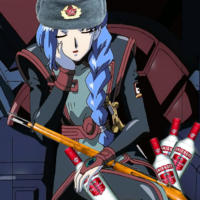 Catharsis: Admiral Spoor "Why are you playing? [Because I don't want you to anymore]" -NoZoupForYou