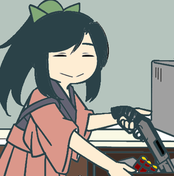 What could had been the 3rd Yamato class battleship

By WilylolFederation, March 27, 2018 in Battleship Era