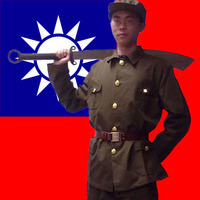 Background Flags for Pan-Asian ships need to be corrected

By Red_Tornado_Striker, December 20, 2017 in Player Feature and Gameplay Suggestions