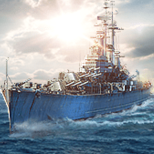 Should Colorado get a New Hull upgrade?