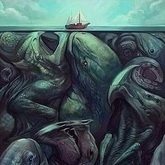 Clan Battles- This Guy Gets it...