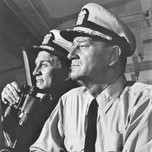 A Personal Hero of mine

By donaldEpott, November 26, 2016 in Historical Discussions and Studies